I don’t remember what I was working on when Tom Farber asked if I would write the Afterword to his protean collection of epigrams, The End of My Wits (Andrea Young Arts / El Leon Literary Arts, 2013), but I’m sure it was very important since I told him I didn’t even want to consider it for another two weeks. No pressure. You may not like it. It’s a lot to take on — five previous volumes, twenty years of labor, amusement, mania, of staring into the bowels of human foibles, with passion, with utter clarity, with wit to sheer off the top of your brain — now collected into a snug four hundred pages. How many ways can this book give pause? — Line by line.

Two weeks to the day, Tom delivers the ms. The deadline? One month. I stare across the chill. What’s in it for me? I couldn’t believe I said that. You know, nice Chinese girl, blah, blah. But, this was a high stakes conversation. Stark.

Tom knows I’m slow. That’s probably why he set limits. Publisher, printer deadlines. Do you believe him? Neither did I. Because it was not like Tom to wait till the last minute. Which then begged the question, who else had been asked, had politely declined? Whatever reason Tom had, the only one that made sense was that I was the busiest person he knew.

Besides the aforementioned, so-important-project I can no longer recall, I had another deadline: I was going to Texas in October, to see art. To see the Lucian Freud retrospective at The Modern. Do not shake your head unless you know something I don’t. Michael Auping, The Modern’s curator, had the audacity, the vision, to fly to London and persuade Freud to bring the retrospective to The Modern in Ft. Worth, as the only US venue that “could do it justice.”

But, Tom. Epigrams. Tom gave me an out: I’ll take a blurb. If you were to quote a few epigrams, which they would be? I didn’t see that as an out. Can any writer of conscience write a blurb without reading the whole book? Can we distill that rich experience into a quintessential line or two without mulling that experience over for at least two or three times the hours or days we put into reading it? But, wise Tom, in giving me room to say no, over and again, he made it easier for me to say yes.

I started marking my favorite of the epigrams, trying not to choke on my sandwich as one amusement after another danced across my line of sight. Two weeks in, I realized I had better start even though I was only halfway through the book. Reading the piths ten, twenty at a time was mania. His mania fed my mania. I wrote non-stop for ten days, continuing to read as I bricked one idea over another, hoping my arguments would achieve some modest structure. I broke for dinner, to swim, to sing, to see friends, but always rushed home to work. I lived and breathed that book for a month. The essay could have become a dissertation. Now comes the irony: I had spent my undergraduate years avoiding writing any sort of paper. I even got away with it. A work of analysis was, I felt, not mine to give.

Joan Didion in The Paris Review interview says about writing that it’s a hostile act. “The writer is always tricking the reader into listening to [her] dream.” It’s a high wire act of persuasion.

The Who: Thomas Farber. The What: The End of My Wits (so many ways to read that line), from which comes: “Sex, what puts you in contact with people you might otherwise never know.” The How? A lifetime of compression, of poetic attention to the essential, and only the essential. As for the Where and When, see below.

Laura’s “A Man and an Epigram Walk Into a Bar” is the Afterword to The End of My Wits, by Thomas Farber. Michigan Quarterly Review published it online. Read it here. 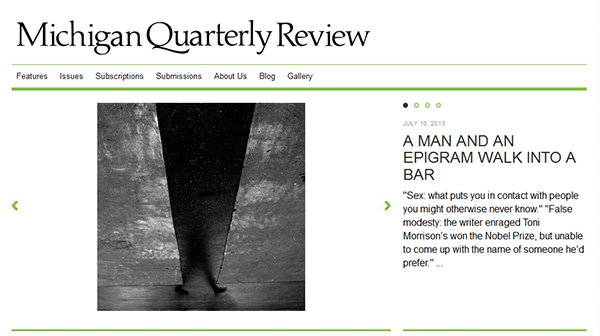 Louis’ essay, “A Man and an Epigram Walk Into a Bar,” appears as the Afterword to Thomas Farber’s collected epigrams, The End of My Wits (Andrea Young Arts/El Leon Literary Arts, 2013), and is published online at Michigan Quarterly Review. Take no prisoners.

In ‘”The Burden of Dreams,'” why did you put the burial before the death?”

I do things instinctively, what feels emotionally true. Later, I might realize that they are not logical or chronological, but I don’t let that sway me from what feels right. I met this extraordinary young woman. A year later she was dead, and by her own hand. I barely knew her yet felt a tremendous loss like nothing before. Hers was such a white light. As one friend said, let’s remember her the way she was. That’s such a human response necessary for survival. Yet, I felt her so alone on that last hour. Alone, and very brave. But alone or in company, it is alone that we meet death. Putting the scene of the burial before the death, butting it up against the exuberance of that day we met, giving the reader no warning, seeing her rich potential and the loss of hope, for us and for her, showing that everything can change in a moment, the stark finality of death — I wanted the reader to feel some measure of that.